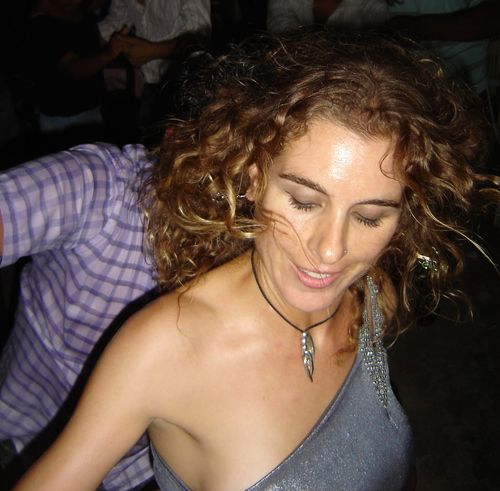 I currently live in Cozumel, Mexico and teach Salsa On1 group and private lessons to both local and visiting dancers. While Salsa On1, also known as LA Style is the only style I teach, I also dance Salsa On2, or New York Style, Cuban Style, and Mexican Salsa.

My history with Latin Dance began when I lived in Bolivia and realized I was missing a large part of their culture by not knowing how to dance. It was there that I learned Cumbia, and then learned Mexican Salsa when I moved back to my hometown in North Carolina. My good buddy Lillian would take me to the Salsa clubs with her sisters where I became addicted to Salsa. Then one day I saw a couple dancing some very sophisticated, sensual, and precise moves on the floor that seems to flow right into the music. I immediately wanted to dance like them. I discovered they were dancing Salsa On2, or New York Salsa. Not long after that I started taking classes with Betto Herrera, who I credit with a large part of my Salsa skills. When I moved to Cozumel, none of the locals danced Salsa On2, so I switched to dancing On1 (LA style), still part of the Salsa In Line family. Friends would ask me to show them new moves, so I began classes with the help of Obet and La Palapita den Medio. Afterwards I started teaching at Tiki Tok since they continued offering their live music every weekend. I look forward to meeting Salsa dancers of many different styles in the days to come!

One of my Salsa idols Edie the Salsa Freak best explains it when she tells us the difference between the different styles of salsa commonly danced in Latin night clubs around the world. I take inserts from her article "Salsa Dance Styles of the World" in italics and add in some of my own knowledge to explain the different styles that you might see danced here in Cozumel:

Salsa Dance Styles of the World ...

"Los Angeles Style Salsa:
I found this to be true in California. The primary influence in Los Angeles is West Coast Swing and Latin Ballroom. Many of the showy tricks and Caberet moves are taken from Swing and Latin Ballroom, which is very prevalent and highly competitive and influential throughout the Mid and West Coasts. Unlike Miami, there are not many Cuban immigrants in Los Angeles, hence the Salsa dance style is predominantly a hybrid of Swing, Ballroom, and a soft Puerto Rican style. In New York, however, because of the high concentration of Puerto Rican immigrants, the Puerto Rican style is much like that of what is now New York style, Latin Hustle, or what we call "Mambo On-Two". Because South America is so close to California and Los Angeles, LA-Style Salsa was based around Colombian style when it was first created in the early nineties by the Vazquez brothers (Francisco and Luis) and Joby Brava, Janette Valenzuela, Alex da Silva, Solomon Rivera, Joe Cassini and Enio Cordoba and Teryl Jones - who incorporated the cross-body lead and tricks, lifts, and jazzy hip hop to the style.

Cuban Style Salsa:
In Cuba, I found that the music has determined the style of dancing. The contemporary faster rhythms of the more popular bands, such as Charanga Habanarra, and Los Van Van, are taking the style of Salsa to a more non-partner dance. From carefully watching the Cuban style throughout Europe, I would say that at least 30% of Cuban style is being danced solo, depending on the song and its rhythms. If there is a tremendous amount of percussion, the woman can shine with her incredibly beautiful and rhythmic body movements. In fact, partner dancing the Cuban style is so restricting to the woman, that I found many of the women could not wait to dance solo for a while.

The way Cuban Salseros hold on to the women’s wrists during the majority of the dance, restricts her from extending her arm and fingers, and displaying a sexy style of her own. Cuban style appears to be a very male-dominated "macho" dance, more so than the New York or Los Angeles style, which fully displays the woman, and allows her to stylize with her arms, hips, and head. "On-Two" dancing to hard-core Cuban music is also a bit more difficult, although it can be done with a very well-trained ear. In recent years, I found most New York dancers don’t particularly enjoy an entire evening of contemporary Cuban music. They prefer the traditional Salsa / Mambo music, that is more suited to their style of dancing.

The newer sounds of Cuban music emphasize the "One" beat of the rhythm and the "Three" beats of the rhythm, much more than the "Two" beat. The rhythms are also much faster, hence the solo styling done more often than partnering up. With the opening up of Cuba, and more and more Cuban music and bands visiting the United States, I foresee dancing on "Two" becoming tougher for the average dancer to want to learn, unless people still listen to Puerto Rican style music, and Salsa from Puerto Rico, New York, and Los Angeles. It will be interesting to see how the style of dancing in New York will change with more and more Cuban-style musicians entering the market. "

This style is the most popular here on Cozumel and is actually salsa mixed with a different type of music called "Cumbia". It's similar to the salsa rhythm but has a longer pause between the first three and the last three beats. While it's possible to find teachers of Mexican Salsa here on the island, it is rare to find a true Cumbia instructional class as most people who dance Cumbia were taught by family and friends. The style is still quite popular in South/Latin America and can be distinguished by a circular style of open/side breaks with a tap on the pauses of 4 and 8. Feet never move forward and backwards as in the LA or NY style Salsa. Instead, the movement is a series of back to centre or side to centre footsteps. Mexican Salsa Cumbia often includes long combinations of circular turn patterns and is generally not a fast or "showy" style. It allows for less ladies styling than NY or LA style. 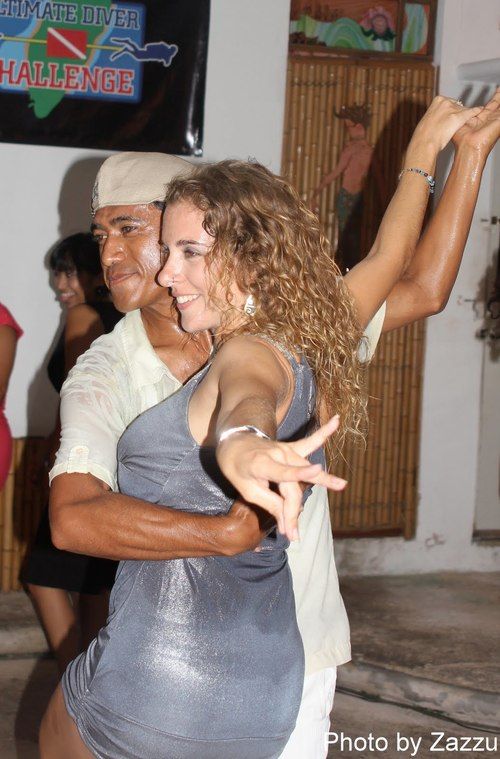